Back in October, I spent 31 Days reading and writing through the Book of Sirach. Not familiar with the Book of Sirach? According to Wikipedia, “The Book of the All-Virtuous Wisdom of Joshua ben Sira, commonly called the Wisdom of Sirach or simply Sirach, and also known as the Book of Ecclesiasticus or Ben Sira, is a work of ethical teachings from approximately 200 to 175 BCE written by the Jewish scribe Shimon ben Yeshua ben Eliezer ben Sira of Jerusalem…Sirach is accepted as part of the Christian biblical canons by Catholics, Eastern Orthodox, and most of Oriental Orthodox. The Anglican Church does not accept Sirach as canonical but only should be read, “for example of life and instruction of manners; but yet doth not apply them to establish any doctrine.” Similarly, the Lutheran Churches include it in their lectionaries, and as a book proper for reading, devotion, and prayer. Its influence on early Christianity is evident, as it was explicitly cited in the Epistle of James, the Didache, and the Epistle of Barnabas (xix. 9). Clement of Alexandria and Origen quote from it repeatedly, as from a holy book.”

I just love it because it’s so practical in it’s wisdom. Today, in the Book of Sirach, let’s look at chapter one verse twenty-nine, “Don’t give people reason to call you a hypocrite, and pay attention to what you say.” (Common English Bible with Apocrypha)

Book of Sirach: Pay Attention to What You Say

Chris called me a hypocrite one time a number of years ago. He also said I didn’t have any faith. I know…a Holy Spirit Kapow! Who did he think he was talking to and about? I went to church more than was “required.” I read my Bible

and spent lots of money on other spiritual books..of course I had faith and I spent the time and money to prove it!

But he was right I later learned.  I talked the talk of a good Christian.  I prayed and told others I’d pray for them.  I talked about how good God was and I would remind others when they were struggling.  I said God would take care of me and you, all we needed to do was ask.  And at the end of the day, or even sometimes in the middle of the day, I’d be this big ‘ol scared mess worried about: dying young, dying old, dying slowly, dying too quickly, losing my mind, going out of my mind, going to hell, going to heaven, not having it all figured out, not knowing what I needed to figure out…I mean gracious I was a mess!  But I could dress that mess up.

The daily affirmations I write about so frequently, those were and are for me as much as for you.  My mind would say, “I’m scared.”  But I would force myself to consciously think and maybe even say, “God has not given me a spirit of fear.” (2 Timothy 1:7)  My heart would tremble, “I am afraid.”  And I would remind myself, “When I am afraid I will trust in You.” (Psalm 56:3)

I also asked God specifically for what I needed…belief. 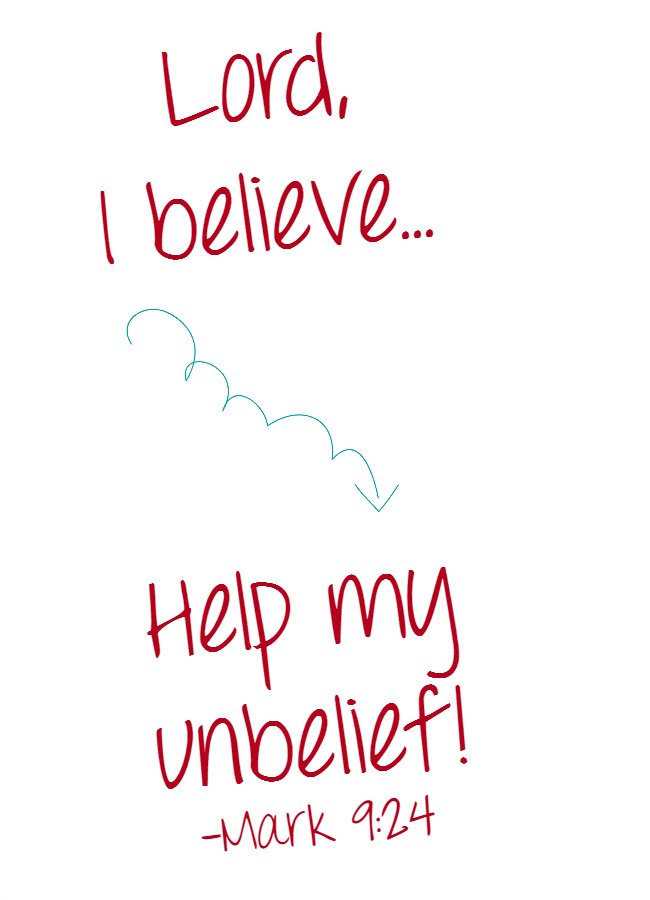