Have you heard of the Book of Sirach? Stick around here long enough and you will; I even spent 31 Days reading and blogging through the book of Sirach here at The Littlest Way. Why Sirach? Because any book that begins with this sentence, “Wisdom comes from the Lord,” needs to be read, not once, not twice, but many times. And because I think the book of Sirach is a gold mine few have discovered, much less dug deep into–myself included. I relate the book of Sirach to the story of Cinderella. A hidden gem kind of kept locked up and hidden. Once revealed, my oh my it sparkles. It’s beauty could almost surpass the more well known book of Proverbs, yet it’s simple thoughts and words of humility, keep it from doing so.

This post may contain affiliate links to products I love and recommend.

According to Wiki, “The Book of the All-Virtuous Wisdom of Joshua ben Sira, commonly called the Wisdom of Sirach or simply Sirach, and also known as the Book of Ecclesiasticus or Ben Sira, is a work of ethical teachings from approximately 200 to 175 BCE written by the Jewish scribe Shimon ben Yeshua ben Eliezer ben Sira of Jerusalem.

In Egypt, it was translated into Greek by the author’s grandson, who added a prologue. The Prologue to the Book of the All-Virtuous Wisdom of Joshua ben Sirach is generally considered the earliest witness to a canon of the books of the prophets, and thus the date of the text as we have it is the subject of intense scrutiny. The book itself is the largest wisdom book to have been preserved from antiquity.

Sirach is accepted as part of the Christian biblical canon by Catholics, Eastern Orthodox, and most Oriental Orthodox. The Anglican Church does not consider it canonical, but says it should be read, “for example of life and instruction of manners; but yet doth not apply them to establish any doctrine.” Similarly, theLutheran Churches include it in their lectionaries, and as a book proper for reading, devotion, and prayer. Its influence on early Christianity is evident, as it was explicitly cited in the Epistle of James, the Didache , and the Epistle of Barnabas.

The above explanation may be helpful and important to some but not really to me. What is important is that whatever I am experiencing, facing or dealing with–whatever I want to say or pray–the book of Sirach contains the same sentiments. And here you will find my writings on this beautiful book of the Bible 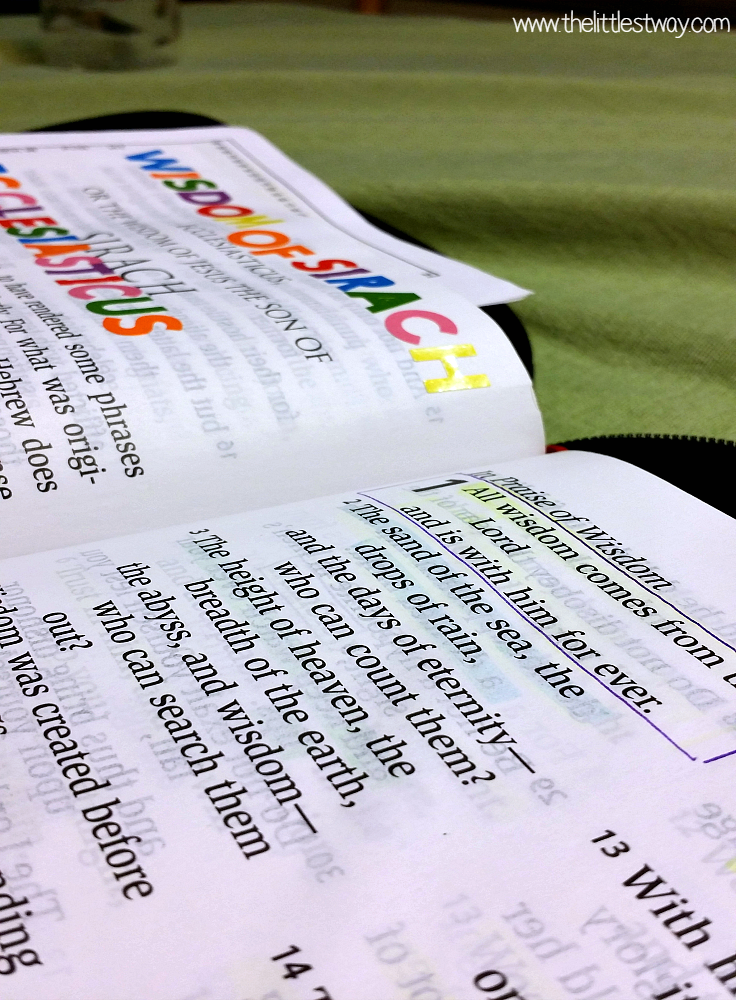 The Book of Sirach

31 Days in the Book of Sirach

Book of Sirach: Pay Attention to What You Say