Today in my One Year Bible the first reading, from the Old Testament, was taken from Genesis 37:1-38:30. It’s the familiar story of Jacob, his father’s favor, and his brother’s hatred. As I read it this morning, I was struck by the question, “Who is trying to kill my dreams?” Or at the very least, sell them out? 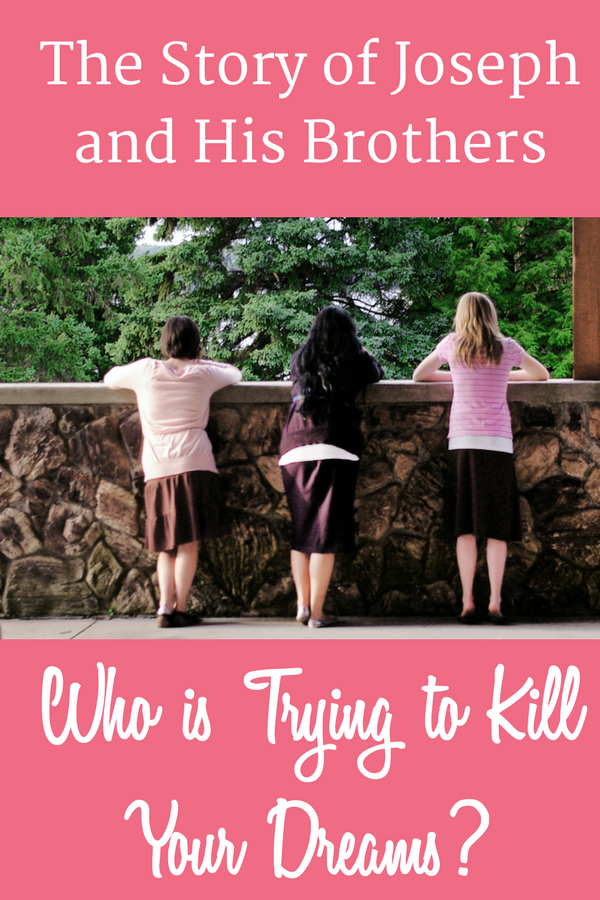 In the story, Joseph’s brothers already had a hatred towards him because of the way their father treated him. Coat of many colors ring a bell? And to add insult to injury as the saying goes, he then shares two of his dreams with them, which they are not very happy about.

In Joseph’s brothers’ defense, the two dreams Joseph shared involved them bowing down low to him. Maybe Joseph didn’t use the most prudence when he shared those dreams, but we all know how everything worked out in the end.

So, Joseph shares his dreams, he brothers go out to pasture the sheep, and eventually, his father sends him out to check on them. When they see him coming in the distance, they say, “Here comes the dreamer!” (NLT) You and I both know they didn’t say it in a nice, meaningful way.

Once his brothers identify him and realize he’s coming out into the pasture with them, they decide, then and there they are going to kill him. Their “well thought out plan” is to throw him in a deep pit and let him die down in it.  The part that makes this plan so appealing to them is that they won’t have to physically kill him.

According to the New Living Translation, as Joseph’s brothers are plotting his death, they say, “Then we’ll see what becomes of his dream!” I’m starting to think maybe he shouldn’t have shared his dream with them? Do you know the feeling?

The story continues and his brothers start feeling a little guilty and greedy. Not guilty about the plan, but afraid they’ll feel guilty later on if they touch him to kill him. So now the plan becomes to sell him.

The brothers figure if they sell Joseph…well, win–win right? Joseph is out of the way, they didn’t have to kill him so their conscience can be clear, and they make a little change in the process.

This story got me thinking about the friendships we allow in our lives. This topic has been a frequent one this past year as I’ve had to be intentional and careful about the people I allow to influence my life.  I’ve needed to allow myself grace and space and I needed others to do the same as I processed the death of my grandma, strained relationships, and a Melanoma in Situ diagnosis; anyone of those could have easily kept me in bed under the covers.

As we consider the friendships we allow access to our hearts and minds, the people we allow to influence us, we need to ask a couple of fo really hard but really good questions.

Who in our life is not happy to see us find favor with someone or to be blessed by someone or something?

Who cannot stand our happiness?

Who reacts like Joseph’s brothers when something good happens to us, specifically, “They couldn’t say a kind word to him.”

Friends, I have struggled with people and words this year. I mentioned recently in an Instagram post, “Sticks and stones may break my bones and words will crush my spirit.” It’s because of this, keeping myself in THE WORD is crucial! The lies and influence of others can be so noisy and insistent!

Considering those questions above, think of this too, when we share our dreams, our goals, and our hopes with these friends, do they sneer and call us a “dreamer” like Joseph’s brother did? That is a red flag friends! It almost makes you want to cry with Jesus, “Get thee behind me Satan!”

Who in our life doesn’t believe in our dreams?

Who in our life tries to kill our dreams?

Who in our life tries to sell our dream short?

Listen, we don’t need these ‘friends’ in our life. We’ve already got someone who is just waiting for the chance to kill our hopes and dreams. The enemy is prowling around, waiting to crush our hope, kill our dreams, and watch us slowly die.

And after all those questions above, I have one more, who is the Reuben in our life? Joseph’s brother Reuben went along with the plan but secretly was going to come back to the pit to rescue him. But when he came back, Joseph had already been sold.

Who is the one friend that thinks they’re doing good by going along with everyone else because in their mind, they have a plan to ‘rescue’ you; only to find out later, it’s too late.

And now for the positive friends, family, and influence. For those in our life that encourage our dreams, don’t remind us of our past failures or point out all the stumbling blocks to reaching our dreams. Let’s offer a prayer of thanksgiving for them. They won’t push us or our dreams off into a pit and then leave us both for dead.

1. I love this Hope ‘Wear One Share One’ necklace. What a great way to remember to pray for each other!
2. Nothing like a nice big cup of something warm among friends♥
3. Who doesn’t like some happy mail? Look at this friendship postcard set.
4. A Friend Loves at All Times necklace; they won’t kill your dreams or push you into a pit.