I wish I could remember when and where I read the article. Not only would I like to link to it, but I’d also like to re-read it…or not. I was pretty hot after I read it the first time, and then a second time when I read it to my husband. I might have read it one more time just to make sure I read it correctly. Finally, after many months, I’m ready to address the article.

Um, excuse me? I’m not well versed in the official school of logic, but it seems to me, if families were placing sports before God, they would not be at Sunday Mass, in a sports uniform, they would be on the fields…period, not the church and the fields. 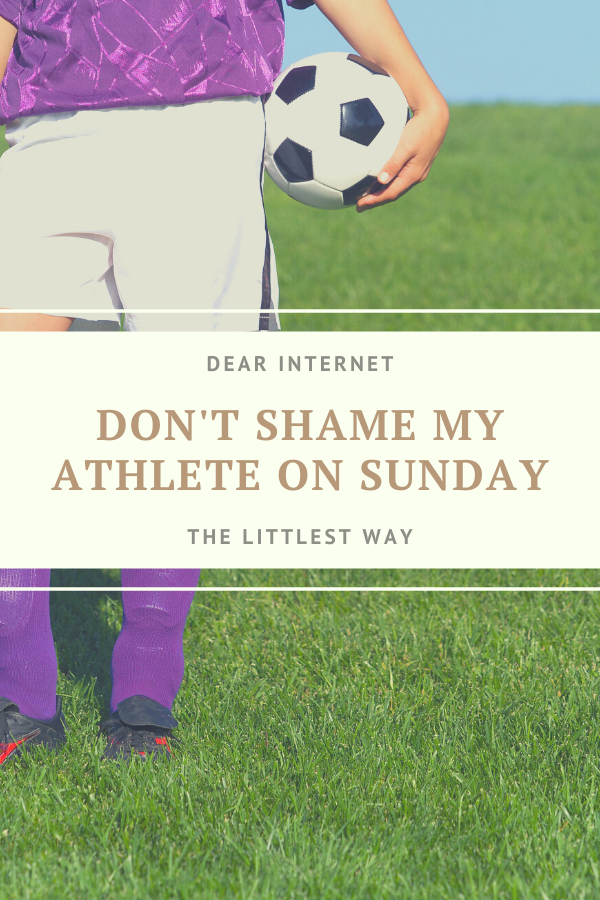 Let me take the time to explain, from my perspective and personal experience, the behind the scenes of a child attending Sunday Mass in a sports uniform. Although extremely rare, it has happened in our family. And I say extremely rare because normally my athlete will pack and wear Sunday clothes to Mass and then quickly and awkwardly change into their sports uniform in the back seat of the car on the way to the fields, but there have been exceptions.

So let’s start at the beginning and detail a time and place when a child might wear a sports uniform to Sunday Mass.

Let’s say you have a child who has played a certain sport for a few years and has decided they love this sport so much, they want to play it in college. So as a family you decide to take on the sacrifices of time and money for your child and the sport they love to pursue it at the next level.

This time and money may look like out of town games on the weekend. Many of these games are opportunities for your child to be seen by college coaches. (Although in our case we found the college, it didn’t find us.) So you fill-up the fridge and pantry for those who stay home and you load up the car for those who travel out of town, maybe even as far as eight or more hours away for the weekend. You try to remember to pack everything you will need, including Sunday Mass clothes.

Once you arrive at your out of town destination, you go through the weekend game schedule to see when and where your games will be played. Then you start Googling Catholic churches near you. You start comparing Mass times with game times. Friend, if only it were so easy and straight forward, but your research has just begun.

See, once you find some possible Sunday Mass times, you now have to start investigating the church. Is it in full Communion with Rome? You’d be surprised friends. You search for photos online of the outside of the church to see what the area looks like; you are in an unfamiliar town and have no idea which side of town is the “good” side or the dangerous side of town.

That search usually eliminates a couple more churches, again, depending on the size of the city or town. You finally find a Sunday Mass to attend. Perfect, your child’s games are at 9am, noon and 3pm. This means you need to wake up at 6am to pack, check out of the hotel and attend the 7am Mass; this after being on the soccer fields until 10pm the night before.

At this point, your child is tired, banged up, hungry and needs to be on the fields by 8am for the 9am game.

They really, really don’t want to show up to Mass in their uniform but missing Mass is not an option, so they put on their soccer uniform. They hope the people in the church are kind or at the very least ignore them.

Of course, there are those in the church who stare at your soccer player in their uniform. They give them and you the once over and decide because you’ve allowed your child to wear their soccer uniform to Mass, soccer must be more important to your family than the Mass. They have assumed wrongly!

Those judgmental souls have no idea what their stares are doing to you and your athlete. You’re trying to focus on why you came, why you and your child sacrificed sleep and breakfast and even a little of your pride by showing up in a sports uniform that you know will garner some disapproving stares. Friends, you’re at Sunday Mass because you love Jesus more than soccer.

Maybe one day, this love of Jesus and soccer for your child will find it’s home in a beautiful, authentically Catholic college where they get to play soccer at the college level. And in this place, as a team, they will attend Mass one day in their soccer uniform because they’d rather attend Mass as a team in their uniforms than leave the girls behind who didn’t bring Mass clothes or who aren’t Catholic and wouldn’t attend Mass. But since the whole team is going, looking like a team, these girls join the team at Sunday Mass.

I have to believe all of Heaven rejoices to see these girls, as a team, at Mass together, in their uniforms.

Have you ever heard the phrase, “Grace builds on nature?” We used to have a priest who preached this often. It means you meet people where they are. The example he always used was as a seminarian working in a crisis pregnancy center. At the center when a woman would come in for a free pregnancy test they would introduce the idea of Natural Family Planning to her, even if she were unwed. People scoffed at this idea! “Teach her abstinence!” They would argue.

Our priest told us first you had to get these women to stop killing their babies via artificial contraception by offering Natural Family Planning…then, you teach them abstinence and the beautiful design God has for their bodies.

So internet Catholics, don’t shame my athlete or our family if you see one of my children in their sports uniform at Mass. Actually, don’t shame anyone you see at Mass. You’re not there to shame, you’re there to worship Jesus.

Leticia Adams said she used to show up to Mass wearing short shorts and knee-high boots just waiting for someone to say something to her so she could walk away from the Church. No one did and that girl is one of the greatest evangelizers of the love of God meeting us right where we are!

That soccer player, or that woman wearing an inappropriate dress, well they’re probably there for Jesus just like you, it just looks different than you. Grant us and them the grace to grow where we are, where Jesus has placed us.

He sees us, don’t worry.