Let me just start off rather bluntly…I was a mess when I married.  I didn’t appear to be too much of a mess, although I’m positive there were signs; I pretty much fell apart once we were married.  You know how adrenaline and optimism keeps you going…and then it doesn’t and you fall into a million little pieces “after the fact?”  Well, that was my 1992-1997.

Looking back at that time when I didn’t know what daily affirmations were, I simply considered these repetitions my battle cry! I was fighting for my life spiritually, physically, mentally, and emotionally! Repeating the promises of the Sacred Heart I had read in the book became my habitual battle cry. These repetitions were an anchor in a stormy mess of a poorly lived, miserable life.

Daily Affirmations and the Feast of the Sacred Heart 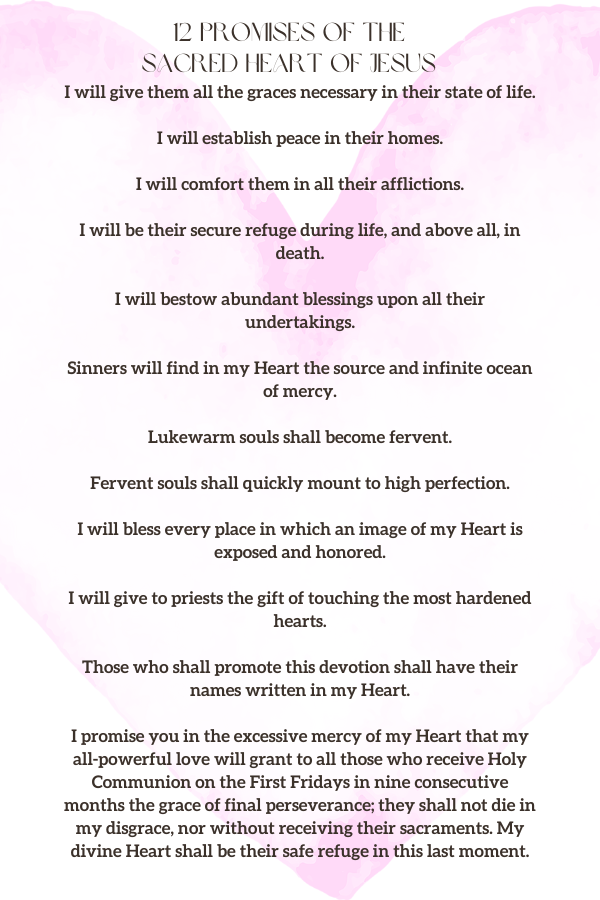 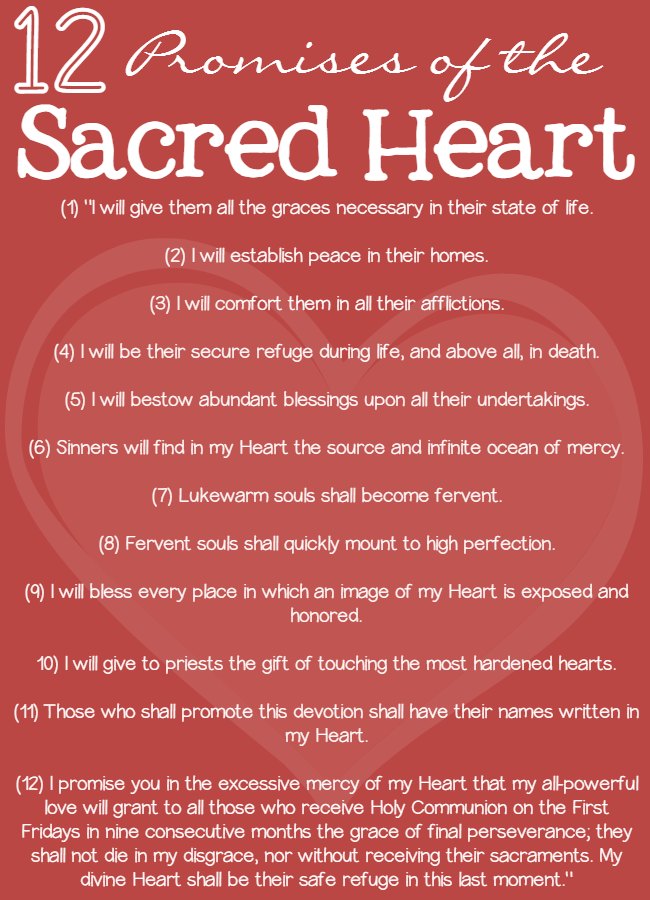 The opposite of the stormy mess I was living and pathetically calling my life was peace.  I desperately clung to the second promise of Jesus to those who were devoted to His Sacred Heart–“I will bring peace to their families.”  I repeated this over and over as one would a daily affirmation. At the time, I hoped just saying the words over and over again would change the course I was on. We all know that’s not how it works but man I hoped it would because I knew I was in for a long and hard battle.

That Third Promise, “I will comfort them in all their afflictions,” became those quiet words of reassurance I whispered to myself as I curled up in the fetal position in the corner of my self-destructive mind.  “He will comfort me in all my afflictions,” was the healing balm to the wide-open wounds I was creating in an effort to heal.

Healing can be a series of being left raw and vulnerable. The Promises of the Sacred Heart covered me in His grace and mercy.  As necessary as I knew this tearing up and tearing down and tearing apart was, it hurt like, well, hell.

The pain of healing can uncover and in a sense, reopen wounds so deep and so raw that one feels like they are living a literal hell on earth. At one point I told my spiritual father I honestly believed it would have been less painful if I were to cut out my DNA and replace it with new.

The beginning of this tearing down of Jenny in order to rebuild–because as the scriptures state, “you cannot put new wine into old wine skin,” was (providentially) founded on God’s love and mercy found in the Sacred Heart of Jesus.  Could it have been founded on anything else? Would it have been successful if healing took place outside of the love and mercy of Jesus Christ?

Look around the world at all the hurting and you tell me.

I was mercy deficient y’all and I providentially found the source of God’s mercy and the infinite bestowal of His mercy in His most Sacred Heart. I was sick and weak and struggling and didn’t know any better! But God did and in the bottom of an old box of books–a smelly, roly-poly infested box, at the very bottom, was an old, hardback, red book, The Devotion to the Sacred Heart of Jesus: How to Practice the Sacred Heart Devotion

I devoured that book like the starving soul I was. Funny because now when I pull it off the shelf to read it, it does not ignite that same spark of desperation or fervor it once did. Again, another “God thing” because years ago I would have told you that book was written especially for me with my name secretly embossed on every page, now? Anytime I’ve picked it up since I’ve found it dry, boring, and hard to even understand. 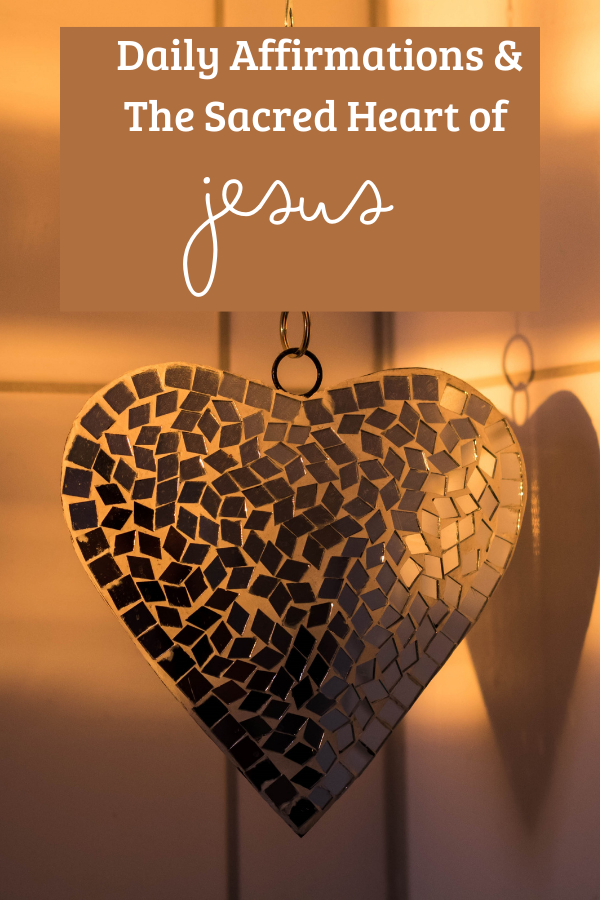 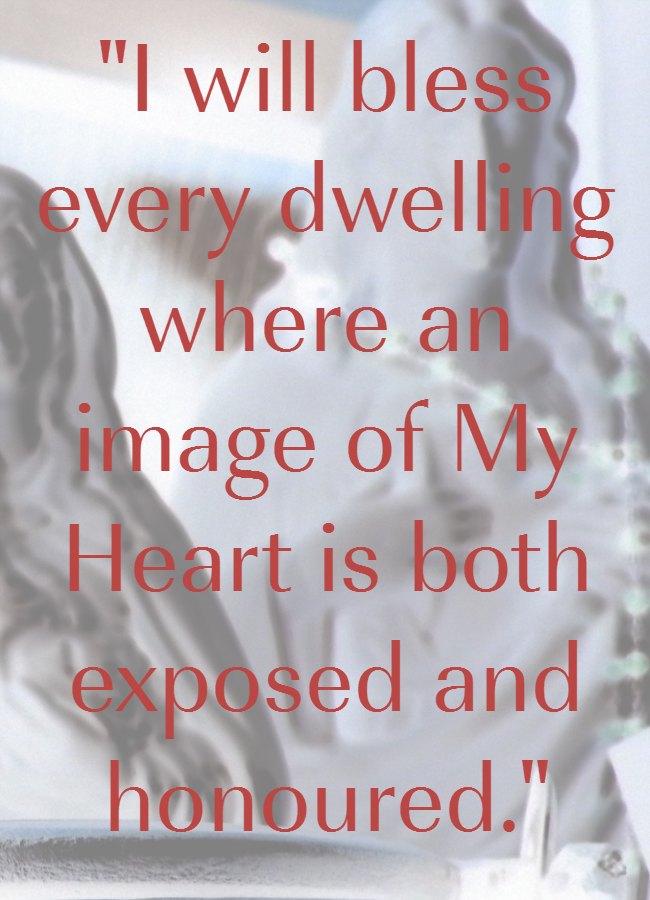 Are you in need of a good dose of mercy? Struggling under your own unforgiveness of self? Find your harshest critic, merciless judge, and strongest enemy in the mirror? Grab this book and read. Take our Lord’s words of love and mercy in–devour them, and be made new.

The point of this memory and this post is to show daily affirmations can in fact be very Christ-centered; don’t let the New Age sound fool you. Were it not for Christ’s mercy and the daily affirmations I began using after reading that book on the Sacred Heart, who knows where I’d be?

I also strongly recommend consecrating your home to the Sacred Heart of Jesus and enthroning Him as the King of your home. More information can be found here, Enthronement of the Sacred Heart.

« I May Not Be Who You Thought: Assume the Best
This is How to Join a Bible Study »