I mentioned the other day I’m in a period of revelation right now. It’s like I’ve been seeing things one way and now the Lord is granting me this incredible grace of seeing things, the same things even, from the other side. And although I consider this a tremendous grace, it also comes with a fair share of pain and sorrow. I’ve told Chris I feel like I’m being pummeled right now as I’m coming out of a hard season.

I was telling a friend the other day one of the things I’ve been given some insight into is the fact that I think for the past two years I’ve been making decisions from a place of exhaustion and pain. Being a lovely and truthful soul, she told me she thinks I’ve actually been living in that isolated and dark place of exhaustion and pain for four years, not two. I think her time frame is more accurate than mine. 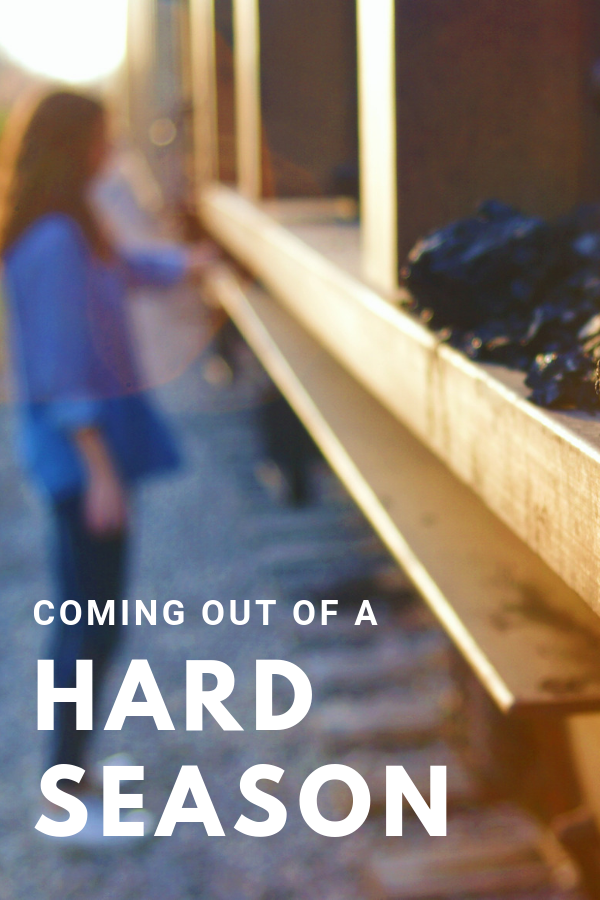 Coming Out of a Hard Season in the Dark

As I’m coming out of a hard season, there are some “mile markers” along the way that are reminding me of the way back to me. Remember years ago when I was in the depths of hard? I was fighting hard for my mind; it wasn’t a battle anyone could do for me and I knew for me, I had to face it head on which meant struggling through the anxiety, fear, obsessive thoughts, and pain without taking medication.

I cannot adequately explain how hard that time was; if I wanted to act like one of the cool kids I’d use the word “freaking” (or worse) to tell you it was so freaking hard my whole body physically hurt as well as my mind. I also cannot tell you the number of times I thought defeat was right around the corner.

Coming Out of a Hard Season in the Shadows

Living in the dark was fairly obvious right? And pretty scary; fighting my way out of it was a no brainer. But living in the shadows, the gray areas? Not as obvious, not as threating. Living in the gray areas lack the urgency, the “fight or flight” that the dark period held. So I settled in and pretty soon living there became the path of least resistance.

Here’s what the path of least resistance has looked like the past few years:

I stopped taking pictures. Remember I started taking pictures as a way to see in the dark. And then once I could kind of see–because I had made it to the shadows, my eyes adjusted, so to speak, and I put my camera down. I used to upload tons of pictures to my computer monthly. Looking through my hard drive now, I have been uploading, in a year, the number of pictures I was uploading in a month.

I used to walk around my little farm almost every afternoon and take pictures. I used to take my camera with me everywhere, even if I was just running to the store, I’d grab my camera. wallet and phone.

Along these same lines, I also thought a bigger, better, newer camera was better. I started wanting for more and stopped appreciating what I had in terms of “gear.” I started focusing on the equipment and lost some joy in the present moment of taking the picture.

Now all of this cannot be blamed on living in the shadows of a hard season. A lot of this can be attributed to our crazy soccer schedules. But rather than find a workaround or at least strive for a couple of good days in the kitchen, I just got swept along in the current of the path of least resistance.

I lost sight of enjoying the present moment. Life became a series of “What’s next on the list.” Rather than finding or even creating times or pockets of fun, I waited for them to magically happen. Um, heads up, fun doesn’t always just show up on your front door. And if it does, it’s usually short-lived and circumstantial.

I already mentioned I stopped taking pictures; I stopped capturing the moments that made up my blessed life. I let mental, emotional, and spiritual fatigue influence my “recognize and appreciate the present moment” stamina and that doesn’t work well if you are wanting to live an abundant life, John 10:10b, “I am come that they might have life, and that they might have it more abundantly.”

I didn’t challenge my body. Years ago when I was in counseling learning to harness my mind and bring my thoughts in subjection, the counselor always told me one of the best things to combat anxiety and depression was exercise, especially walking. So I walked on my treadmill consistently.

Then a couple of years ago I started working out at home using Fitness Blenders videos off of YouTube. My body began to noticeably change, I felt more energetic, more positive, and had an all-around renewed sense of strength. Then life threw some serious curveballs.

Coming Out of a Hard Season in the Light

Looking back, I can now see I went from a depth of darkness to the shadows. Of course, when you step out from the darkness, any amount of light will seem bright. I didn’t realize until recently that I’ve still been feeling my way along life in the shadows. And now friends, I’ve worked hard enough and long enough to realize I need to step out of the shadows.

There are a couple of things I have done that made the shadows recognizable and the light desirable:

I committed to daily–“quantity”–Bible reading.

This started last year when I purchased a One Year Bible, in a translation I love and want to read, not a translation everyone else reads, or I “should” read because it’s holier, more accurate, etc.

I opened my Bible almost every single day of last year. I read the readings for each day. I made any and all notes I wanted to make regardless of if they sounded holy or asked lofty, theological questions.

I didn’t color code or practice elaborate or detailed Bible Journaling. I read for pleasure and knowledge and with the intent of getting to know God better so I could grow in closer friendship with Him.

I started exercising with accountability.

About a month into my son’s summer training I asked his trainer if he would tweak the training schedule to fit me–meaning at home with a barbell, dumbbells and a treadmill instead of a gym and fieldwork. Luke, his trainer and I sat at the dining room table one night and reworked their training program to fit my needs…and let’s be honest, my wants. They would suggest jump rope and I’d say, “No. I don’t want to jump.” And we’d come up with something else.

I’m in my third or fourth week and I am amazed at how much more energetic I feel! I have a renewed sense of confidence in myself and my body. I have pushed my body to do things I know it’s capable of even though it’s temporarily hard.

The rush of endorphins combined with the sense of accomplishment has been an incredible mood booster physically and psychologically. Seeing some muscle definition has been a much-needed confidence boost and just something really fun for this momma!

I was talking to my spiritual director about all of this the other day, and when I started hitting on the benefits working out has had on my mind, body, and confidence, he said he couldn’t be happier to hear all of this! It’s not vain to want to look and feel good.

And without going into all the details ladies, when you feel better physically and have more confidence, you are more receptive and maybe even have more initiative in the marriage. Just saying.

Look, the enemy wants nothing more than to kill, steal and destroy. If he can attack our self-image, our confidence, our energy level even, he can slowly chip away at the marriage; he’s got all the time in the world. When he can weaken the marriage, he can take more direct shots at the family unit as a whole.

I started scheduling and guarding fun.

Rather than living in a utilitarian mode of a boring calendar of appointments, I’ve scheduled and guarded Friday nights for fun in our home.

Our entire family looks forward to Friday nights! We eat something yummy and we play something fun. We talk about our Friday nights all week long; we think about what we’re going to cook and eat and we toss around game ideas–unless I have a surprise game for the family!

I opened up, even at the risk of being hurt, again.

Years ago, we had friends over multiple times a month. In the Spring and Summer, we always joked, “Let’s burn something,” as an excuse to host an impromptu party in our yard. We live in the country so there’s always brush or rotten tree stumps to burn, perfect for a s’mores pit.

Another factor in our Friday nights has been the addition of my son’s assistant soccer coach/trainer/now dear family friend. There are so many ways he has blessed our family with a renewed sense of joy and enthusiasm.

He comes over knowing the boys will climb on his back and Luke will challenge him with his new found strength. He knows Chris will torment me and we will all tease him over long card games or ridiculous antics during charades. He knows we take our faith seriously and we know he takes his just as seriously.

We all have our own stories that God can use to bring about new friendships that fill broken places–if we’re open and willing. This is so funny because I’m a pretty devout introvert and semi-recluse and yet…and yet, when I was writing down goals and dreams for the new year, one of my entries was “Hospitality.” It struck me as so odd that I would feel led to include that in my list. I now know it was Divinely inspired.

Friends, I know I’m not the only one who has been living in the shadows and is coming out of a hard season. I know there are many of you who are still straining to see the light at the end of the tunnel. Keep going. It’s there friend–even when you don’t see it.

Don’t be afraid of making adjustments, shifting your perspective in order to quit stumbling along blindly in the shadows and start living freely in the light. Don’t be afraid to schedule and guard fun, to move your beautiful body, and to stop and fully take in the moment. Most importantly, begin and end with nurturing your friendship with Christ, the light of the world.