Philippians 2:14-16 got pretty busy in my Catholic Journaling Bible; timely, and busy. There were two important points I pulled from these couple of verses. First, grumbling, complaining, and murmuring are big time no-no’s! I started writing the second point but this post got too long so look for a “Part 2.”

Do everything without complaining and arguing, so that no one can criticize you. Live clean, innocent lives as children of God, shining like bright lights in a world full of crooked and perverse people. Hold firmly to the word of life; then, on the day of Christ’s return, I will be proud that I did not run the race in vain and that my work was not useless.
+Philippians 2:14-16 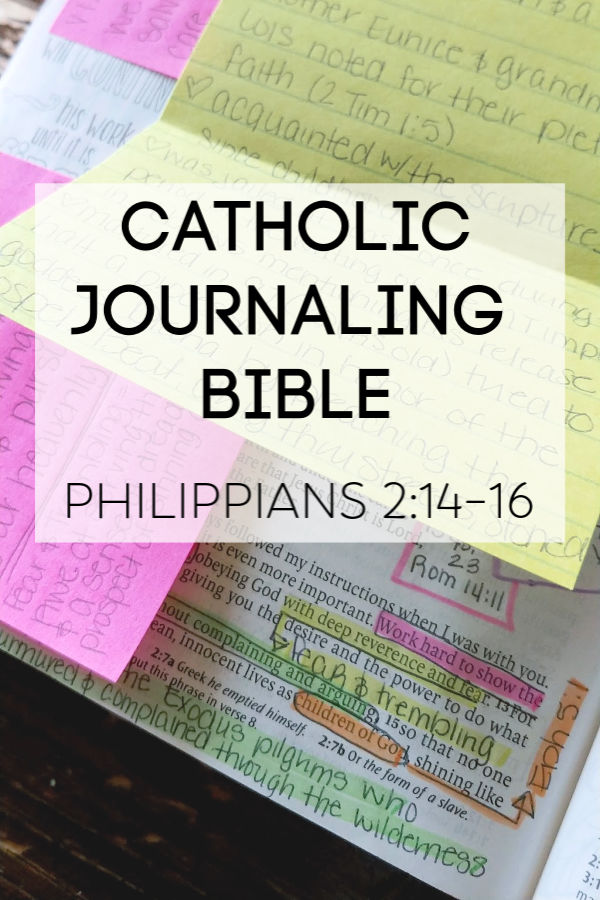 Before we start digging into this verse, let’s look at it in different translations:

The first point I want to make in this Catholic Journaling Bible post begins with a question, “What are we questioning, arguing, or hesitating about?” The answer is the will of God. When you break it down, we’re questioning, arguing, and hesitating with God about His will for our life. We argue when we know it and it doesn’t really look like we think it should or we thought it would. We argue when we don’t know it and can’t even see it!

Now, one of the fun parts of Catholic Bible journaling is getting to dig deeper into a topic. For this post, we’re going to dig into murmuring, complaining, and grumbling. I found a really beautiful piece on contentment by Jeremiah Burroughs; I have no idea who he is but his commentary on contentment is right on the money!

Jeremiah Burroughs bases his commentary on contentment around a couple of Bible verses from the Book of Jude. He begins with Jude 1:14-15, “Enoch, who lived in the seventh generation after Adam, prophesied about these people. He said, “Listen! The Lord is coming with countless thousands of his holy ones to execute judgment on the people of the world. He will convict every person of all the ungodly things they have done and for all the insults that ungodly sinners have spoken against him.”

Let’s quickly look at the beginning of this Epistle to see who “these people” are. In verse 4 the apostle states he is writing because “some ungodly people have wormed their way into your churches…” So this letter is addressing the problem of ungodly people. In it, he writes the ungodly: say God’s grace allows immoral living (v4), claim their dreams have authority allowing them to live immorally and defy true authority (v8), they are led by their passions (v10), and deceive people for money (v11). But look at verse 16!

“These people are grumblers and complainers, living only to satisfy their desires. They brag loudly about themselves, and they flatter others to get what they want.”

Holy Smokes! The ungodly who do all those ugly, sinful things above, can also be characterized and recognized as grumblers and complainers! I’m gonna need that to sink in a little. See, just going through the list above detailing how the ungodly behave, I was like, “Hmm, I think I’m doing ok.” And here’s why it’s important to keep reading friends!

When we as Christians, Christ-followers in this un-Christian world, murmur and complain, we are behaving just like the ungodly. “In that moment, are we not exercising a rebellious spirit against God’s Providence?” The commentary author goes on, “Murmuring borders on blasphemy. It is proof of ingratitude; the murmurer is ungrateful to God.” 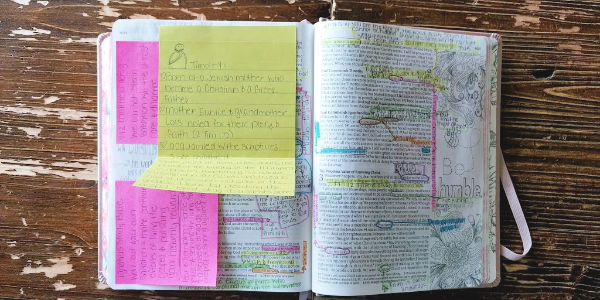 A Catholic Journaling Bible obviously can’t contain everything, so sometimes I like to use online resources like an etymology dictionary. The etymology of the word “blasphemy” states–Latin blasphemia,blasphemy; from greek blasph_mein, to speak ill of. And the Catholic Dictionary defines blasphemy as “Speaking against God in a contemptuous, scornful, or abusive manner. Included under blasphemy are offenses committed by thought, word, or action. Blasphemy is a grave violation of charity toward God.”

Now, some may wonder how complaining can be a grave violation of charity towards God. Because every single thing we have is from God; the very breath we take to the earth we live on is in His design and control and He provides it for us. God doesn’t need sunshine or rain, air or earth. We do.

I’m not sure if this quote comes from Jeremiah Burroughs or someone else but it sums up his comment and my statement, “When those who profess faith in Christ complain, they possess a spirit that is contrary to the Spirit of Christ that dwells in them.”

Friends, there is a prayer right there in that quote, “Lord, please show me any spirit in my heart that is contrary to the Spirit of Christ. Bless me with the courage and resolve to confess it and then leave it, never to return to it again. Help me to cultivate the Spirit of Your Son in my life and open my eyes to the opportunity to share that Spirit. Amen.”