Day 27 of my 31 Days Writing Challenge! Well, since I skipped a day it’s day 26, but 26 days in the book of Sirach…awesome! Yesterday we considered A Good Wife: An Intelligent Wife. Have you given much thought lately to what kind of wife you are? Well, today (actually late tonight) let’s consider A Good Wife: A Modest Wife. 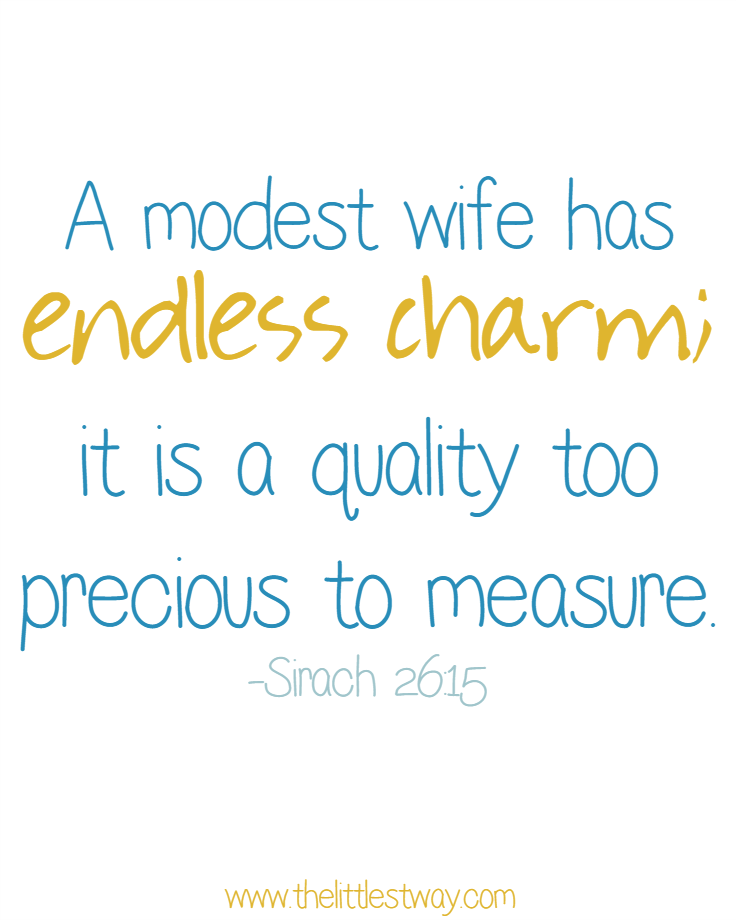 A Good Wife: A Modest Wife

When I read this verse in Sirach 26, I immediately knew there had to be more to the word “modest” than just a woman who wore skirts and turtle necks. So I headed over to my bookmarked Thesaurus to see what some of the synonyms for “modest” are. Here are some of the words that stood out to me: humble, quiet, simple, discreet, nice, temperate.

I’m not too surprised by any of the synonyms are you? I did like seeing humble on the list because recently as I’ve been reading through Sirach, I’ve taken to drawing a box around the word humble. But the word that made me go “Ah-hah!” was “temperate.”

Yesterday, we considered A Good Wife: An Intelligent Wife and one of the words we considered was “rational.” Temperate can mean calm, moderate, controlled…which sounds like a pretty rational wife to me.  So again we see, according to the book of Sirach, a wife who is not a slave to her emotions is a blessing to her husband. Why? Because he can count on her.

A husband needs to be able to depend on his wife’s steady and constant support. Woman was created to help the man because he needed help…or God would not have created her and spoke of her as a helpmate. But he does not need some unstable, flighty woman to contend with. (Of course, I am not talking about a true mental issue.) He needs to know if times get tough, she will remain a constant source of support; it’s hard enough for a man to battle the world, he does not need to then come home and battle his wife.  This support frees him up to do what must be done.

A modest wife blesses her husband because he does not have to worry about her behaving scandalously in thought, word or deed. He knows she will carry herself in a controlled manner, not clearing the Target one dollar aisle when there’s no money in the account because she’s bored or trying to keep up with her neighbors. He knows he can tell her he has to work the weekend shift and she’s not going to fly off the handle blaming him for all her unhappiness.  He knows she is his safe place in a crazy world.

A modest wife allows her husband to do and be his best because he can count on her.

Click here to read more posts about a good wife.

Each day there is more encouragement and even some laughs over on my Facebook page. Head over and “Like” me there for more.

Here are some blog linky parties this post may be link to.